As December turns into January, most Minnesotans aren't giving much thought to sandals. Matt McManus is the exception.

McManus is co-founder of Bokos, a 1-year-old sandal company based in his parents' Plymouth house. After facing disaster earlier this year when its entire inventory nearly sold out in five months, the company is gearing up for a busy spring with a new crop of footwear. McManus is hoping to move his product from web-based sales into retail stores.

The first-year run on inventory proved the sandals' popularity for McManus. Taking the business to the next step has proven to be a challenge.

McManus co-founded the company with his brother, James, basing their product on the design of some sandals James McManus brought back from a visit to China in 2010.

Simple cross-strap flip-flops are popular there.

"We gave them to some friends, and they really liked them," Matt McManus said. "We combined everything we liked from the five or six different pairs he brought back."

Eventually, they settled on a one-piece construction that would be fabricated from rubber.

By summer 2012, the brothers had begun researching manufacturers, eventually settling on a company called Wayabloom in Xiamen, China. James McManus, who majored in Chinese at the University of Wisconsin, now lives in China and helps oversee manufacturing.

They ordered an initial run of 2,000 pairs, not knowing how many they would need.

"We were kind of shooting first and aiming second," Matt McManus said.

The company's first batch of sandals arrived in January 2013, but the McManuses sat on them for several months while James McManus hand-coded the Bokos website from scratch.

"We tried to have as many ducks in a row as possible in months leading up to the launch," Matt McManus said. "We knew we were going to be selling primarily through the website, so we spent a lot of time testing it."

In April, Bokos opened for business. The sandals were priced at $18 -- aiming to fill the gap between the bargain-bin and higher-end sandals from global companies like Reef and Tiva.

It seemed to work. The McManuses noticed in June that they were beginning to run low on a handful of sizes, especially women's 9s. Three months later, they were all but cleaned out of their most popular sizes.

Although the company gave customers the option to back-order sandals -- and several hundred of them did -- Matt McManus guesses they lost several thousand dollars worth of orders.

"It's not good business for someone to go to your site and be interested in your product and see that we only have these sandals in one size," Matt McManus said.

The McManuses placed an order with Wayabloom for a second manufacturing run.

After expanding their sizes and increasing the color selection in both men's and women's from four to six, this second order totaled 12,000 pairs.

In November, just before the second shipment was to arrive, Matt McManus -- with help from his girlfriend's dad -- built wooden shelves in his parents' garage to house the sandals.

When the semi arrived with 240 boxes of sandals, Matt McManus, his mother and a handful of friends unloaded all of them by hand.

"I'm sure all the neighbors were like, 'What are those people doing?' " Matt McManus said.

Two stalls of the house's three-car garage are packed floor-to-ceiling with sandals. The brothers' parents don't mind, though -- along with their sons, they each own 25 percent of the business.

Matt McManus estimates the four of them have invested about $25,000 into Bokos since the beginning.

The brothers' shares came largely from a T-shirt business they ran while in college. They've also reinvested most of the profits from the first shipment.

Although sales have been sluggish since the new shipment arrived, Matt expects them to pick up when spring rolls around. He's planning to work with the University of Minnesota to hire an intern to help fill the orders he anticipates.

Bokos sandals are beginning to appear in stores, locally and in Florida, where Matt McManus attended a trade show earlier this year.

Matt McManus is also hoping to attract specialty retailers to Bokos, a task he had to put off while they were low on inventory.

Although he's been somewhat successful, he's run into a surprising problem with that demographic: His sandals are too cheap.

Smaller retailers with limited floor space don't want to squander it on inexpensive items with lower margins, he explains. And while the rest of the family has encouraged him to court larger retailers, Matt McManus remains skeptical.

Once the big-box stores get their hands on his sandals, he fears, they're likely to cut the price, making Bokos "a $10 brand instead of an $18 brand."

To see the story online: Bokos Sandals in the Pioneer Press 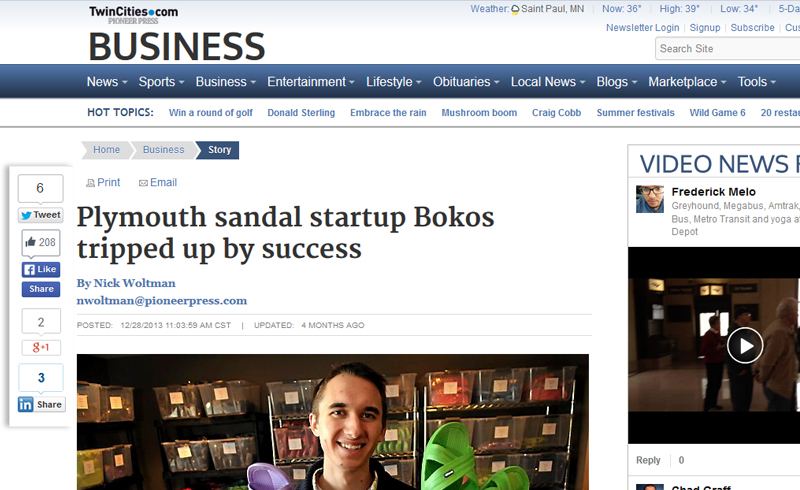